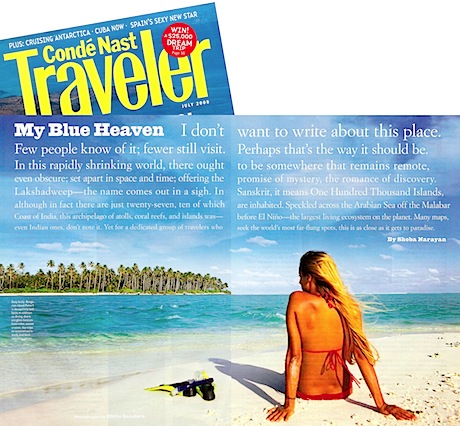 ItÔÇÖs a double-header month with a story on IndiaÔÇÖs Lakshadweep Islands in Conde Nast Traveler in the August issue. I shot the islands after doing a story on the Maldives for them. The islands are a bit like the Maldives but totally undeveloped. The Indian government protects them vigorously allowing in only a few thousand foreigners a year. Traveler had to procure a special permit for my assistant, Joe Fornabaio and I. This series of islands have very white sands and pristine coves. ItÔÇÖs a diverÔÇÖs heaven. The locals either fish or make coconut rope. With the rope they bind and twist the hairs of the coconuts to make long strong ropes. The fisherman fish mostly for tuna using long lines with multiple hooks. In the morning they go out for bait fish by making a partial circle with netting. Then they get into the water and begin slapping the water to scare the bait fish into the nets.

The hotels there are quite basic. One hotel we stayed at Bangaram Resort(TK) is on it’s on island. Very basic accommodations but we stayed in the Gandhi suite. The water on the island is full of sulphur. Some people come here for the supposedly medicinal quality of the water. Personally showering in water that smelled of rotten eggs was not my way of waking up.

Leaving the island we had to take four planes to get back to New York including a stopover in Iceland for a sick passenger. Total return flight–36 hours! I was talking to my kids on the couch and fell asleep for 8.