Artist Series: Out with Fine Art photographer In Sook Kim 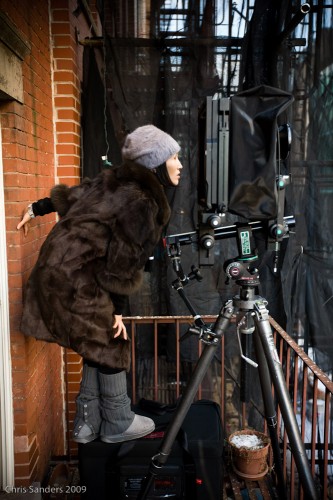 I had the pleasure of photographing Ms. In Sook Kim as she was photographing for an upcoming piece she is doing for the New York TImes Magazine. For this shoot, I tried to be a fly on the wall and photograph her as she put together one of her massive endeavors. This piece like many of hers involves photographing scenes in various apartments as seen from outside the building. She had an 8×10 camera set-up on a fire escape across the street. She lit and directed each apartment one floor at a time. She is Korean but lives in Germany. During the whole production she was speaking three languages, Korean, German and English. She’s very soft spoken but gets what she was looking for.